Two days before learning that she would lose her job, Lissa Gilliam spent hundreds of dollars online on baby products. A 37-year-old expectant mother, Ms. Gilliam had planned to ask local parents in Seattle for used strollers and secondhand onesies in a bid to reduce waste. But as the coronavirus […]

Two days before learning that she would lose her job, Lissa Gilliam spent hundreds of dollars online on baby products.

A 37-year-old expectant mother, Ms. Gilliam had planned to ask local parents in Seattle for used strollers and secondhand onesies in a bid to reduce waste. But as the coronavirus pandemic ravaged the area, new items delivered in boxes seemed a safer bet.

She figured she could afford the splurge, earning $50 an hour as a full-time contractor designing educational curriculums for a nonprofit. But then, on April 2, her employer slashed her hours and told her that her contract would end in early May — a few weeks before she is to give birth.

Suddenly, like many others, Ms. Gilliam became hyperaware of her expenses. She and her husband, a high school physics teacher, now take a painful daily tally of their financial priorities: Is that $5 monthly web magazine subscription really necessary? How much does watering the garden cost? When will they need to tap their paltry savings?

“We’re OK for now,” she said. “But the bottom may fall out from under us.”

As millions of Americans lose jobs, take pay cuts, close businesses and absorb family members into their homes, they are being forced to rethink where their money goes. Even before the scramble for new jobs can begin, people are cajoling creditors, looking for gig work or simply cutting back to get through the first few disorienting weeks.

“An economic shock like this could have a long-term impact on people who have traditionally felt like they were being cautious, that they weren’t profligate with their money, but didn’t have to worry about paying for rent or affording food,” said Stephanie Aaronson, the director of economic studies at the Brookings Institution. “They might have more debt, which will make it harder to spend in the future, or they might just feel less secure, which could boost savings and potentially dampen the recovery.”

Ms. Gilliam and her husband are waiting for Washington State to make jobless benefits available to contractors through a federal assistance program, and hope to take advantage of a state program for maternity aid once their daughter is born. A $15,000 construction project planned for the rear of their house is on hold. They canceled their gym membership, their Hulu streaming service, multiple newspapers and even the Adobe Acrobat software that Ms. Gilliam uses for design work.

On the whole, Ms. Aaronson said, household finances “were in relatively good condition as of six weeks ago — they were actually pretty healthy.” Now, she said, “a much broader swath of households are experiencing a complete loss of income compared to what we typically see in a recession.”

Before the pandemic, Carol Cruz’s private health insurance plan cost her $840 a month — up from less than $500 four years ago. The bill ate up most of her $1,200 monthly paycheck, exceeding even the $600 monthly payment on the house she shares with her husband and their 17-year-old granddaughter in Tulare, Calif.

On March 29, she was furloughed from her part-time job as a mental health therapist until at least the end of May. Other than the state unemployment benefits she hopes to receive soon, Ms. Cruz, 62, no longer has an income.

So she got on the phone for at least three hours a day, asking for leniency from the health insurance provider, her mortgage lender and the credit union that holds the loan for her husband’s Chevrolet truck. All offered her more flexible terms, including 90-day grace periods and pay-what-you-can options. (Some creditors, she said, were less willing to negotiate.)

The adjustments help keep the bills manageable, Ms. Cruz said. But her grocery costs have doubled, now that the price of eggs has soared and her granddaughter is no longer having free lunches at school.

“I don’t know about my future,” Ms. Cruz said. “I’m not letting myself think about tomorrow, just about whether we have food today and money in the bank.”

But some people, many of whom have never seriously budgeted, are now mapping out strict spending schedules for the next few months.

After being furloughed in mid-March from her bartending and serving job at a Minneapolis concert hall, Krissy Calbert, 26, went from earning $300 in tips some nights to having no income as she waited for government aid.

“It was two weeks of just panic — I was just going off the groceries I already had, trying to ration until money came in,” she said. “You get really creative. You eat little half meals, and you experiment with your seasonings and condiments to try to forget that you’re eating the same thing over and over.”

Earlier this month, Ms. Calbert began receiving a weekly infusion of $1,100 from the state. She is now trying to reschedule when monthly bills are due so she can space out the payments: $600 for rent, $75 for her phone, up to $120 for utilities, $60 for streaming services, $200 for credit cards, plus other expenses.

“I’m trying to get all of my credit card payments into the same week, so I can have a credit card week, a rent week, a phone week,” Ms. Calbert said.

She has switched her grocery shopping from Target to Aldi, where, she said, she can afford to splurge on fresh produce and protein. Without health insurance, she is willing spend an extra $30 or $40 on fruits and vegetables in hopes of keeping her immune system strong, she said.

“I can’t take the risk,” Ms. Calbert said. “A hospital bill right now would ruin me.”

More than half of lower-income adults in the United States say they will struggle to pay bills this month, compared to a quarter of their middle-income counterparts and 11 percent of those in the upper-income tier, according to a survey of nearly 5,000 adults by Pew Research Center. Researchers defined a three-person household earning $37,500 to $112,600 annually as middle-income. Over all, more than half of those who expect a federal stimulus infusion will use most of the money to cover essential expenses, while one in five say they plan to save the funds.

To create a financial buffer, many people are hunting for freelance or part-time work. Searches for work-from-home jobs rose 126 percent in March on FlexJobs, while traffic to the site has boomed 58 percent from a year ago. On Upwork, companies are looking for people to provide tech support for their homebound employees and to draft corporate messages about the coronavirus.

Lonn Dugan, a digital marketing specialist in Sylvania, Ohio, has seen many clients scaling back their promotional efforts, such as one nonprofit that cut its budget by 90 percent after a major annual event was canceled. But another client, an agricultural supply company, commissioned a major website update, while a local mental health group wanted to ramp up its virtual support groups.

The pressure on Mr. Dugan, 60, is intense. His workday is three hours longer than it used to be, between his existing clients and his attempts to drum up new business. He and his wife lost a third of their incomes; neither is eligible for government aid.

“We’re completely overwhelmed by the shortfall. We can afford groceries and maybe the house and car payments, and that’s it,” he said. “But we’re not alone, and we’re focusing on acceptance as opposed to hand-wringing. We’re taking care of necessities, and that’s enough for right now.”

Still, Mr. Dugan admits being stretched thin emotionally. He misses his wife, even though they are in the same house and she no longer needs to make a two-hour round-trip commute to her health care job. But the couple are so busy trying to stay afloat that they have stopped cooking fresh meals and turn instead to frozen dinners and fast food.

Sat Apr 25 , 2020
Joshua Fields Millburn & Ryan Nicodemus discuss living a meaningful life with less. With more than 50 million downloads and 7,000 listener reviews, The Minimalists Podcast is often the #1 Health podcast on Apple Podcasts, and it occasionally charts in the Top 10 of all shows. Subscribe Apple Podcasts · Spotify · […] 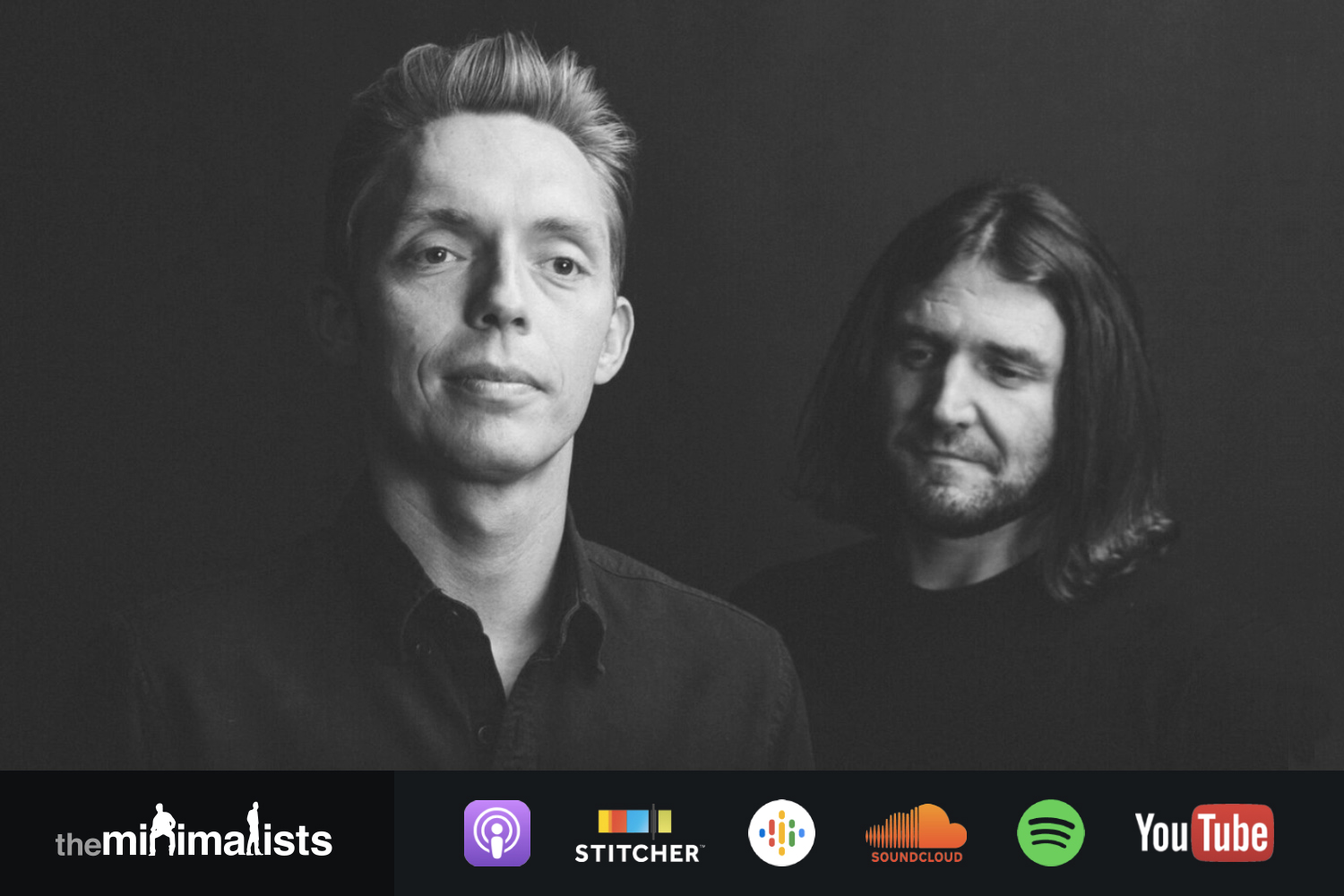