Ensconced in a lucrative niche at home, Jack Ma’s Ant Group nevertheless has to look outward. And expanding overseas has never looked so difficult for China’s biggest payments app, even with the war chest from what may be a world-record initial public offering. Ant will have no problems raising the […]

Ensconced in a lucrative niche at home, Jack Ma’s Ant Group nevertheless has to look outward. And expanding overseas has never looked so difficult for China’s biggest payments app, even with the war chest from what may be a world-record initial public offering.

Ant will have no problems raising the $30 billion it’s seeking in this mega-IPO. Few investors will pass up the chance to buy into the owner of Alipay, a super-app that offers access to everything from insurance and funds to loans and even groceries. For U.S. institutions, the lure of the world’s most valuable unicorn is likely to overshadow the threat of further action against Chinese companies by President Donald Trump, who has already issued executive orders targeting Tencent Holdings Ltd.’s WeChat, Alipay’s biggest domestic rival.

China sales account for about 95{d05f388fa08f4d675a822acf1486e94712302178bac778b4b99d28e44a90be3a} of Ant’s revenue. Yet overseas expansion is destined to become more important to the company. Ant is already so large and dominant at home that its growth inevitably will slow. It also faces intensifying competition in China, not only from WeChat and other technology rivals but from foreign financial firms such as American Express Co., which in June became the first overseas payments network to be allowed to start processing local currency transactions. The real killer app may come from Beijing, which is testing a digital yuan that will offer all the convenience of electronic money.

Tighter regulation may also weigh on Ant’s ability to grow in China. For all the company’s attempts to rebrand itself as a technology firm (a more lightly regulated industry), it still looks more like a financial-services business, as my colleagues Shuli Ren and Anjani Trivedi have written. The company’s Yu’E Bao money-market fund, which grew to become the world’s largest, has already had its wings clipped by Beijing’s financial watchdogs. A quick trawl through Ant’s 674-page prospectus shows just how much attention this issue is consuming: “Regulation” appears almost 500 times. 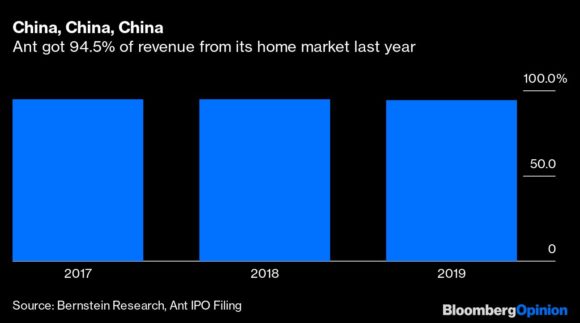 Against this backdrop, Ant identified cross-border expansion as one of the four uses for its IPO proceeds. The company intends to enhance its international payment capabilities, invest in technology and develop more digital payment, finance and daily-life services for consumers, merchants and partners beyond China, according to the filing.

Tourism has been key to the extending reach of Alipay and WeChat Pay. China was the world’s largest source of overseas tourists in 2018, and also the world’s largest spender, driving increased acceptance of the Chinese payment apps in cities from Paris to Bangkok. Post-IPO, Ant faces a dramatically changed environment, with the Covid pandemic having sent the global tourist industry into cold storage.

Geopolitics, meanwhile, was a problem for the company even before U.S.-China tensions reached cold-war levels. In early 2018, Ant scrapped its takeover of MoneyGram International Inc. after the U.S. raised national security concerns. The company also backed out of a promise to create 1 million jobs in the U.S., with Ma blaming the trade spat between the countries. The IPO filing devotes three pages to geopolitical risks, most centered on the U.S. Unlike its shareholder Alibaba Group Holding Ltd., Ant decided against selling shares in New York, opting instead for a dual Hong Kong and Shanghai listing. It still may be exposed to potential future U.S. sanctions, though.

Since the MoneyGram deal collapsed, the company has mainly focused on its Asian backyard. Even here, progress faces hurdles. India banned dozens of Chinese apps in June, following a border clash. Alibaba’s UC Browser was banned, though Ant-invested Paytm has escaped sanction. Southeast Asia, where mobile payments and credit card penetration are relatively low, offer more opportunities, though homegrown competition from the likes of Singapore’s Grab and Indonesia’s GoJek is on the rise.

A fast-growing business with 1 billion customers and a seat at the cutting edge of financial technology is creating understandable excitement. Investors should temper that with a recognition that Ant’s future may be a lot harder than its past.

The most important insurance news,in your inbox every business day.

Get the insurance industry’s trusted newsletter

Thu Sep 17 , 2020
There’s no doubt that money can be made by owning shares of unprofitable businesses. For example, although software-as-a-service business Salesforce.com lost money for years while it grew recurring revenue, if you held shares since 2005, you’d have done very well indeed. But while history lauds those rare successes, those that […]