Shops in England selling non-essential goods can reopen on Monday for the first time in almost three months. Retailers have had to introduce strict safety measures and the High Street experience will be very different. Amid fears about the health of the UK economy, getting a key part of the […]

Shops in England selling non-essential goods can reopen on Monday for the first time in almost three months.

Retailers have had to introduce strict safety measures and the High Street experience will be very different.

Amid fears about the health of the UK economy, getting a key part of the service sector running again is vital. But retail experts warned shops were unlikely to see any immediate relief.

Boris Johnson has urged people to “shop with confidence”.

He said he was “very optimistic” about stores reopening – although acknowledged that retailers did not know whether there will be a “huge wave of customers” or a “trickle”.

The unlocking comes as face coverings become compulsory when travelling on public transport in England from Monday. Children under the age of 11 will be exempt, and the rules might be waived for people who have a legitimate health reason for not wearing one.

However, face coverings in shops will not be mandatory, with retailers hoping their introduction of an array of other safety measures will be sufficient.

Although food shops, pharmacies, banks and other essential retailers have stayed open, vast swathes of the High Street, from bookshops to clothes outlets, have been closed since 23 March.

Retailers are required to introduce plastic screens at the tills and floor markings to keep shoppers two metres (6ft 5ins) apart – measures that are already a regular fixture in supermarkets.

Other measures will include pleas not to touch items unless customers intend to purchase them and decontaminating shopping baskets after each use. Retailers are promising there will be plenty of sanitiser on hand for customers.

In most clothes shops, fitting rooms will be closed. Bookshops including Waterstones intend to put items in quarantine if browsed but not bought, while some jewellers are introducing ultraviolet boxes that can decontaminate items in minutes.

There is also government funding for councils to deploy staff on the High Street to provide help and advice for both shoppers and shops.

Not all stores will throw open their doors immediately. John Lewis will reopen just two outlets on Monday – in Kingston upon Thames and Poole – as part of a phased approach, with 11 others to follow on Thursday.

The number of customers entering stores will be regulated, but Andrew Murphy, executive director of operations, hopes it will mean a better atmosphere for shoppers. “To be honest, I actually think it’s going to be the relative calmness of the experience that will probably be the main thing that strikes people.”

But he did not expect a lifting of the measures any time soon. “We expect this situation to last well into autumn and perhaps winter so we need to be thinking ahead for how things will work when the weather’s not so great,” he said.

Some other retailers selling products classed as essential – such as DIY, furniture and bicycles – have also been reopening. Furniture giant Ikea opened 19 of its stores across England and Northern Ireland recently, prompting long queues.

Shoppers at Selfridges, which is reopening its London, Manchester and Birmingham branches, will have the chance to try before they buy, but any clothes will then be quarantined, while shoes and accessories will be cleaned with sanitising spray or steamed.

Primark, which will open each of its 153 English stores, has pledged to ensure basket handles are cleaned after each use and that every second till will be closed to maintain social distancing for customers and employees.

Many stores are encouraging customers to make purchases by contactless card payments, with limits increased to £45. Arcadia, which owns the likes of Topshop, Miss Selfridge and Dorothy Perkins, has said it will not accept cash.

London’s West End, which includes Oxford Street, is expecting about 80{d05f388fa08f4d675a822acf1486e94712302178bac778b4b99d28e44a90be3a} fewer visitors when it reopens on Monday. Many retailers and analysts are watching closely to see if the surge in online shopping during lockdown continues, possibly piling more pressure on High Streets that have already suffered a wave of closures.

Tracy Harvey, managing director of the independent department store Harveys of Halifax, says customers are set for a “quite different” experience when they return on Monday.

The five-storey shop will be opening just two floors initially. But it won’t be just shoppers who have to do things differently, she told the BBC. “Some of our staff have been working in the building for 30 years. We’ve done training, but breaking the habits of a lifetime is going to be challenging. We naturally do things without thinking sometimes, so it will be a challenge.”

Harveys is the sort traditional department store where some customers come in every day, she said. “We know our customers’ names. We are now asking out staff to interact with them in a very different way. It’s going to take some getting used to.”

Tracy intends to keep the number of customers in the store at any one time to a bare minimum. “We could get more people in, but we have decided to keep the numbers low so that the people who are in can walk around and explore more freely rather than be dictated to every step of the way.”

The British Retail Consortium (BRC), the trade body representing the sector, warned that the unlocking was unlikely to provide any immediate boost for the sector.

Helen Dickinson, BRC chief executive, said: “Retailers have been under immense pressure for the past three months but the reopening of non-essential shops is unlikely to deliver immediate relief. A mix of low consumer confidence and limits on the number of people able to enter stores mean that many shops will continue to suffer lower footfall – and lower sales – for some time to come.”

She called on the government to help stimulate demand with a short-term cut in VAT or a temporary income tax cut for lower-income workers.

Prime Minister Boris Johnson said on Sunday he did not know whether to expect “a flood or a trickle” when the shops reopened but that he hoped people would return in “sensible” numbers. “I think people should shop and shop with confidence, but they should of course observe the rules on social distancing and do it as safely as possible,” he said.

In Northern Ireland, non-essential shops reopened on Friday, but there is still no date for Wales and Scotland.

In England, pubs, restaurants, hairdressers, hotels and cinemas won’t be allowed to open their doors until 4 July at the earliest – and even then, only if they can meet social distancing measures.

Key to a successful reopening of the economy is the two-metre social distancing rule, the hospitality industry says. Pubs and restaurants have warned that they cannot make money if customers are required to keep two-metres apart, and have urged that the distance limit be reduced to one metre.

Mr Johnson has commissioned a review into two-metre distancing, saying there was “margin for manoeuvre” as the number of coronavirus cases falls.

The government is under intense pressure to get the economy moving as fears grow of a new wave of job losses as furlough scheme that has supported eight million workers is wound down.

On Sunday, Chancellor Rishi Sunak acknowledged that more redundancies were inevitable. “Primarily we need to reopen our economy safely and slowly. That is the most important thing to try and safeguard as many of those jobs as possible,” he told The Andrew Marr Show.

But he warned: “There is going to be hardship ahead. People are going to lose their jobs.”

Mon Jun 15 , 2020
Journalists Maria Ressa and Rey Santos Jr. on Monday were found guilty of cyber libel by the Manila Trial Court in the Philippines, according to Rappler, the news site founded by Ressa, where she served as CEO and executive editor. Ressa and Santos were hit with prison sentences of six […] 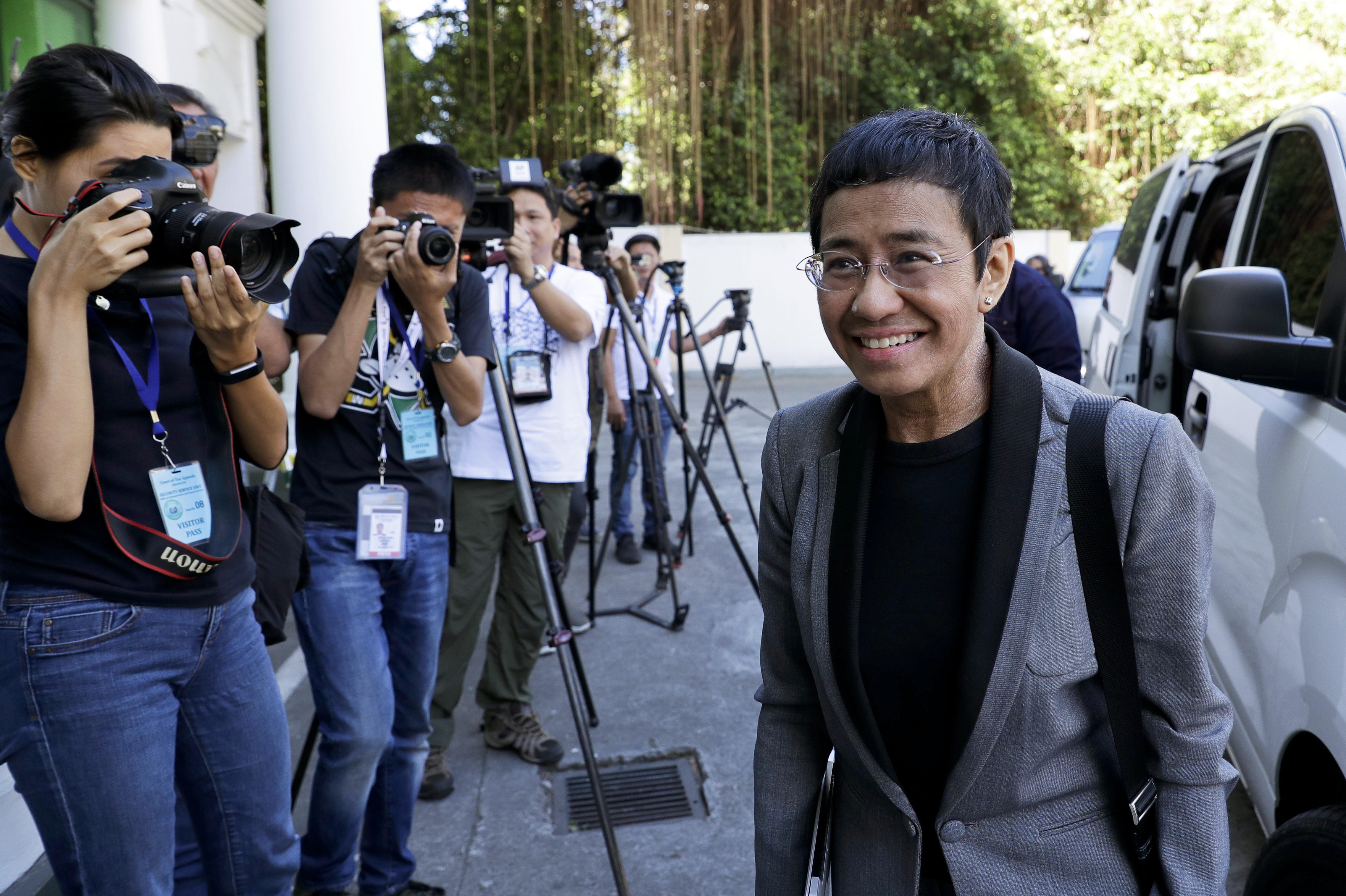